Don't miss out his installation creation entitled "Solid traces", with the dancers from the Trisha Brown Dance Company, into the choreographic centre's brand new studios.

Dance, the ephemeral art par excellence, and the memory of “remarkable movements” appear are the heart of Thierry De Mey’s latest installation. 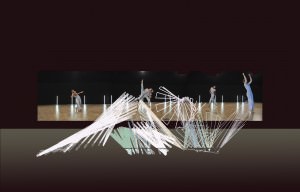 On October 10th at the Philharmonie de Paris, Thierry De Mey will be presenting "Ripple Marks", an opus at the interface of spectral music, production and video, and a stage in the vast Taximonie - la beauté du geste project, a piece for five musicians and five dancers that will be premiered at the Kunstenfestivaldesarts in 2016.

2 years ago, Thierry De Mey had presented "TAXIMONIE" for IRCAM's Research & Creation Seminar as the result of his' research work.

Completion of his research period, the choreographic project is now called "SIMPLEXITY".