Research and Creation Seminar : Tomás Bordalejo and the "Smart Guitar"

The Argentinian composer Tomás Bordalejo is a current resident at IRCAM through the Collegium Musicae and IRCAM’s joint artistic residency program. He will present his “Smart Guitar” project carried out in collaboration with IRCAM’s Instrumental Acoustic team headed by Adrien Mamou-Mani.

This Research and Creation Seminar will highlight a project that focuses on both musical composition and the design of hybrid acoustic/electronic instruments developed by the Instrumental Acoustic team.

The objective of Tomás Bordalejo’s artistic residency is to create a composition for the "Smart Guitar", a project that Adrien Mamou-Mani has developed in recent years. The idea is to realize a mixed music work special in that the sound is produced only by the instrument itself without any loudspeakers! The instrument’s soundboard is used as a loudspeaker.

An integral part of the SmartInstruments project, the "Smart Guitar" is an instrument with variable acoustics that diffuses acoustic and electronic sounds without an external loudspeaker. This is a new way of modulating sound in real-time, but also to make the produced sound by the guitar more complex. This is an innovative way to interact with the instrument’s timber, modifying it, making it inharmonious, enriching it, impoverishing it, or introducing it to the soundboard forcing it to interact with sounds foreign to the guitar.

"The first step of my residency was to familiarize myself with the possibilities offered by this instrument in order to appropriate them and use it as a tool in my writing. Through my conversations with Adrien Mamou-Mani and, being in the instrumental acoustic lab, I was immersed in his work and could completely understand the dialogue between composer and scientist: the research object becomes a writing tool and one for musical expression as well… From these common studies, I wanted to create a dramaturgy and build a long-term musical discourse". (Tomás Bordalejo)

The piece will last about 10 minutes and will be presented June 24, 2016 in the amphitheater at the Philharmonie de Paris, as a part of the symposium "Quand la guitare [s']électrise !" When the Guitar Electrifies (Itself) 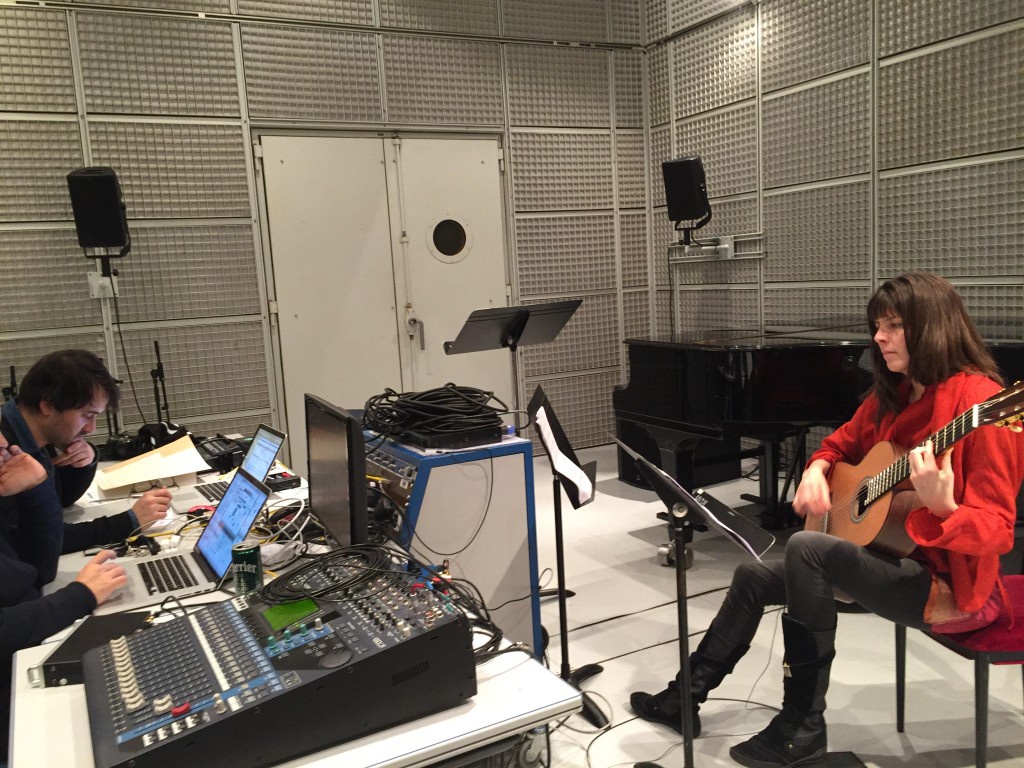