Piloting a microtonal organ with OpenMusic

Forty-nine, Forty-nine was written for the Fokker Organ, a microtonal organ recently restored and installed in the Muziekgebouw aan 't IJ in Amsterdam.The title makes reference to the two modes of determining pitches used in the piece—those using the overtone series as a guide (the piece opens with the 7th and 49th partials, beautifully approximated by the Fokker organ, of a low G at around 49 Hz) and the combination of Huygens-Fokker scale steps—49 steps representing a mean-tone 12th, used throughout the piece. 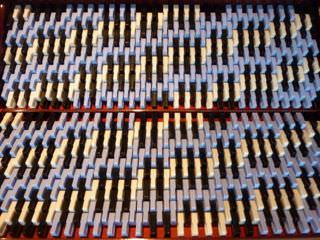 The Fokker Organ is tuned in 31-tone Equal Temperament, with steps of 38.71 cents between each pitch. It has two manuals with two registers each, and pedals with a range of an octave plus a fourth.The rather unorthodox keyboard uses white, black, and blue keys, arranged in overlapping tiers so that one plays horizontally across the keyboard for pitches related by just thirds, but must move diagonally upwards to play "in tune." In this video, I demonstrate a chain of three just thirds, each at a distance of ten steps on the organ (387.1 cents), for a total of 30 steps — or just 38.7 steps short of an octave. I then play this "false octave," followed by a just intonation cadence of G with a 7th remarkably close to the 7th partial, followed by a just major third on C - E.

The Fokker Organ is also equipped with a MIDI in/out, and can play prepared passages like a player piano or disklavier. Forty-nine, Forty-nine is entirely MIDI-controlled, 'performed' by connecting a laptop which plays the MIDI score to the organ. 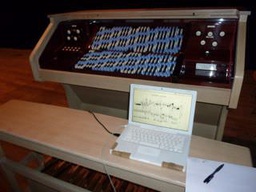 Forty-nine, Forty-nine was composed entirely in the Maquette environment of OpenMusic, then exported as a MIDI file to be played by the organ.In OpenMusic, I was able to integrate the Fokker Organ's tuning into both the compositional and visual interfaces. I constructed a series of tools and gestures—chains of meandering triads, rolled chords, glissandi with a few notes hanging on, rising and falling sweeps and staccato patterns—that became the building blocks of the piece.The main musical material consists of triads built from wandering lines. Sometimes they move rapidly in close position, sometimes slowly and spread over several octaves and registers, or often in some superimposed combination suggestion different speeds of motion—as at the opening, where a series of long and extremely widely spaced chords sounds against the faster mid-register passage seen here:

The goal is always to highlight the organ's unique tuning system with the intervals it best approximates: the just major third, the 'neutral' third (9/11), the seventh partial... Later in the piece, arpeggiated 'spectral' chords (harmonic series with varying degrees of density and deviation) punctuate a diadic or chordal mid-register melody in an homage to Nancarrow... Here is a screenshot of the finished maquette which is the closest thing this piece has to a 'score.' The three rows of boxes correspond to the two keyboard and the pedals and contain musical material being sent to the organ, while the arrows represent register changes.

Forty-nine, Forty-nine was premiered on February 27, 2011 at the Muziekgebouw aan 't IJ in Amsterdam.

Listen to the recording of Forty-nine, Forty-nine here:

Listening with headphones or a good stereo system is highly recommended, so as to properly hear the bass frequencies.

Special thanks to Mikhail Malt and Jean Bresson at IRCAM and Danny de Graan in Amsterdam for technical advice, Turgut Erçetin for the recording, and especially Sander Germanus at the Stichting Huygens-Fokker for logistics and programming.

Composer Christopher Trapani is currently in residence at IRCAM, working with the MuSync team on a Musical Research Residency project to develop real-time tracking of tempo canons using Antescofo~.