Participating in the creation of an opera is a challenging experience for computer musicians, or atleast was the case for me. The computer music design of a lyrical piece (compared to mixed instrumental pieces with live electronics) represents particularities such as strong constraints on means of diffusion and timing.

Producing an Opera is a multidisciplinary work: The computer music designer is not the solely collaborating with the composer alone and this relation is brought to all aspects of creative work: stage director, scenography, costumes, video, singers, etc. It's not necessarily in the implementation of the opera that you'd take the most risk or do innovative work given all constraints. However it's a highly gratifying experience when your electronics functions in synergy with all different components, the "Art Total" which is the Opera. 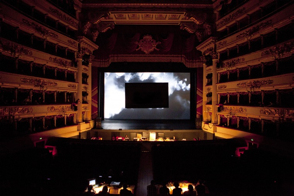 Quartett is an opera by Luca Francesconi, composed in 2010-11 and commissioned by the famous La Scala hall in Milan. It is the first production at Ircam that has ever got through this pretigious hall. The opera was performed there six times between April 26th and May 7th in 2011 with great success and was retaken in Vienna Festwochen in May 2012. Enthusiasts can see it again in Paris in March 2012 in Cité de la Musique (concert version) and even later in Europe (Porto, Amesterdam, Lille, London, etc.).

The title comes from Heiner Müller's famous piece (so does the libretto), as a duo. In the opera the two protagonists are alone on stage during the entire opera (1h20), a soprano and a baryton. But it's also a quartet since they exchange their roles, play other roles and transform. The stage director for this opera was the spanish collective Fura dels Baus who fulfilled the difficult task of putting together music, theater and lyrical actions.

The collaboration with IRCAM started in March 2010, (a year ahead of the production). Our work concentrated on the implementation of computer music prototypes to emulate the overall form and preparing sounds, effects and spatial parameters. We try to focus here on the dramatic aspects of electronic sounds.

The first aspect of the work is precompositional: Like many of his counterparts, Luca Francesconi uses computer tools on a daily basis. The very first sketches of the opera was a computer sketch, drawing temporal aspects of the grand form of the piece. 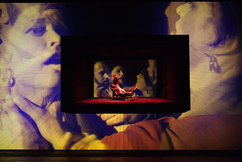 During our work, we had serious exchanges with the Analysis/Synthesis R&D team at Ircam on the analysis of vocal quality and voice segmentation in order to allow expressive re-synthesis of vocal sounds. In the piece, Merteuil and Valmont play extreme roles from savagely to intimately refined with great complexity. Authorship of these roles require rhetorical vocal characterizations in order to distinguish different roles played by the same actor. To this end, we confronted the great traditions of opera with novel vocal transformations in real-time. Each actor was associated to various processing schemes but with well-defined characteristics. Roles incarnated by singers are represented by vocal transformation characteristics realized by live filtering, transpositions and cross-synthesis by SuperVP for Max modules. Quartett is an opera which is an example of musical research, bringing together both scientific and artistic research within one context.

The two singers in Quartett are accompanied by a chorus of 80 singers, two orchestras, and two electronically generated sounds. Electronic sounds are either generated live or pre-recorded during studio work.

Part of the orchestra is in a pit, as is the tradition in operas, whereas the rest and the chorus are in a remote hall. The two ensembles represent spaces where each actor evolve: A Claustrophobic Space and an outside world. The electronic virtual space follows the same principle. The Spat module allows creating multiple coexistence of spaces corresponding to the two situations. More precisely, five distinct spaces were employed corresponding to various dramatic situations of the piece:
“Stage” : Natural and direct voice on stage
“Close” : Concertino and claustrophobic , quite dry
“Close-puppet” : Nearfield with mechanical and rhythmical movements
“Dream like” : “outside”, big distance effect, frontal, Far orchestra in virtual acoustics
“Out” : Far orchestra, Traversing the hall, “above audience”

Spat is not used here simply for source deplacement but to create virtual acoustics and move from one to another, corresponding to the evolution of actors in the piece: From a box, on stage, to cities, to the world. This stage effect is essential for relating theatrical means to that of cinematographic and musical representations for the opera.

Recording and Synchronizing the “OUT” orchestra

For the Milan version of the opera, the big orchestra and the chorus, playing in a remote hall, were pre-recorded. In live performance, this recording was re-produced and synchronized with a click-track so that the conductor can coordinate orchestra in the pit with recordings.