The origins of SMAQRA are to be found in the various results on my personal work on sonic explorations. This will include the integration of cultural elements and the deformation of causal listening. The identification and fuzziness of sound sources, from the hybridization characteristics of the instruments from Latin America and Western culture (gestures, stamps, space, etc ...) constitute a key element of my creative work. Furthermore, the development of new composition technologies related to the development of new instruments capable of transmuting their sound and create sound ambiguities is another important component of my work.

My aesthetic approach is to mix two very contrasting musical cultures: the western culture and Latin American culture. This approach is reflected in the hybridization of perceptual cues sounds to reveal the evocative and irrational nature of their substance to make them sometimes enigmatic.

In 2014, a new step in my creative work was initiated during the writing of SMAQRA (2015). The first piece for "hybrid string quartet" with video was made in collaboration with the filmmaker Joachim Thome when I was assigned by the Centre Henri Pousseur and The Quatuor Tana with the support of the Sacem.

The definition of hybrid instruments is the following:

"The principle of the hybrid instrument is based on the use of acoustic instruments controlled by feedback with processing and sound synthesis, to expand the sonic possibilities of the instruments. The final sound is thus hybrid. It comes from the superposition of the acoustic vibration (or mechanical) and digital sound processing. "1

Since the beginning of time, musical instruments have experienced modifications that enable them to comply to the expressive contemporary requirements. Thus, certain instruments, for instance: violin, viola and cello (that the modern string quartet is composed of), have a history dating back to the first monophonic instruments, such as the troubadours' Rebec. The addition of the sound-post to increase the low volume and thus getting a larger projection, the curvature of the bridge to play only one string at a time, the string tension, and the addition of cello end-pins from the instrument to stabilize, are among the most significant changes of the string quartet instruments.

In the second half of the twentieth century, a new source of inspiration for composers and their quest for new ways of expression was developed: electro-acoustic music. Thus writing music for electronic sources mixed with instrumental sources, called mixed pieces, is becoming increasingly important in the panorama of contemporary music. These pieces are created under different broadcasting systems: stereo, quadraphonic, 5.1 (film) 8.0, among others, and the electronic part can be addressed by the fixation of the sounds, real time or both simultaneously.

This new concert situation has surely changed the listening habits of auditors, and their attention was brought to focus most on the sound production through loudspeakers. In other words, the instrument is not anymore the main source of the sound projection. This situation has brought new opportunities in musical writing, especially, regarding the physical space of the sound and its movement, the ambiguity of the timbres, or the composition of the sound itself. However, the musicians have lost some ontological concepts. The performer is less involved in the overall result of the performance itself. Even in the case of a monitoring system, the performer is in need of assistance in the concert hall in order to have a more refined interaction with the electronics playback. The cause-effect relationship is often unknown to the performer, because of its isolation, behind the line of speakers; therefore the overall result is often an approximation. The ambiguity of timbres and their usage in musical writing remains under the ambitus of music known as Acousmatic.

"Interpretation is at the center of the compositional process. This aspect did not disappear from mixed music. But the fact of creating electronic sounds outside the concert situation has revealed on the behalf of the composers a meticulous concern in sound production, which doesn't authorize any freedom of interpretation. "2

Writing a twenty-first century string quartet implies a new way of thinking the instrument and its expressive potentialities.

"The instrument issue is the primary issue of music tradition itself. It is its concrete basis, prior to any system and musical language. These are closely related to the types of instruments to embody them. "3

One attempt in resolving the dichotomy between instrumental space and the electronic one, was the merging of the synthetical with the physical world by sound diffusion through the body of the instruments.

Wishing to develop my musical research for composition, and inspired by explorations conducted by Adrien Mamou-Mani (acoustics researcher at IRCAM) in the field of augmented instruments, I became interested in the construction of these instruments called "hybrid".

These classical instruments have the ability to project electronic sounds by themselves. This innovation re-establishes the link between the sound causality and its projection concerning live electronic pieces and creates coherent sound ambiguities related to the spatial context.

Hybrid instruments will once again allow the performer to control the heart of his resulting sound management. It will also make possible live electronic concerts in non-equipped places, permitting a greater diffusion.

The instruments used in SMAQRA are the hybrids instruments of the Quatuor Tana. We decided to name them as follows: TanaViolins, TanaViola and TanaCello. These hybrid instruments are neither related to loudspeakers embedded in instruments, nor transducers glued on the instruments with fixed dough or with any adhesive tape, but rather new instruments, built with actuators, sensors, amplifiers, XLR outputs, jack inputs and classical instruments.

Photo #2 : the instruments of the hybrid string quartet

Quatuor Tana and I, requested the development of these new instruments. Built by luthier Lucas Balay, according to my research and inspiration from the concept of Adrien Mamou-Mani, coordinator of IMAREV project, these new instruments avoid any unwanted vibration or "shake" between the actuator and the body resonance; the actuator is attached in a definite state to the bottom of the instrument. An electronic filter adapts pitch range for each instrument. The electronics uses the acoustic radiation qualities of classical instruments which is not the case with speakers. The resulting sound is the sum of the acoustic vibration of each instrument and electronic processing. 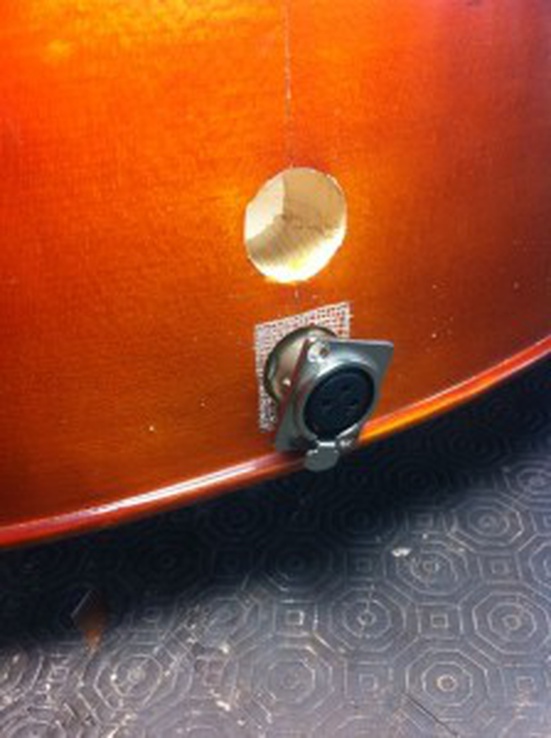 Photo #4 : location of the XLR input on cello 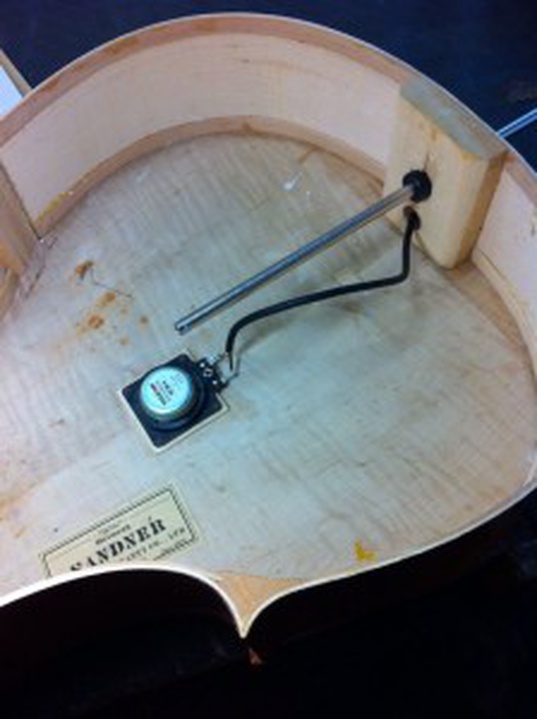 Photo #5 : location of the actuator cello

SMAQRA is the first piece written for hybrid string quartet. This piece is a continuation of my exploratory work on the different types in "deformation of causal listening".

Initially,I devoted myself to the exploration and establishment of the basic treatments, such as frequency shifting, delay, distortion, reverb, source-filter synthesis and spectral delay in order to understand the behavior of these instruments. All these treatments have been controlled by the envelope follower and / or the frequency follower allowing the performer in controlling electronics. 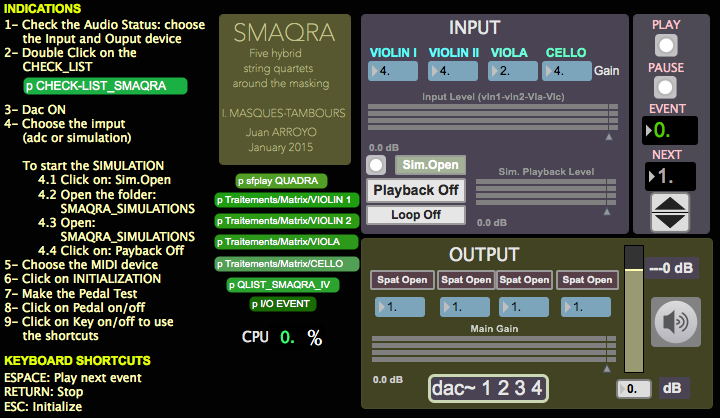 Later, I imagined instruments capable of transforming their timbre and becoming almost other instruments or as I put it, "chimeric instruments". The ambiguity of sound sources fascinates me. It invites us to think about the nature of the sound, by proposing an enigma. More broadly, it is an interrogation on perception and alterity.

My exploration consisted in bringing the concept of sound masking to create an illusion with instrumental, pre-recorded sounds and treatments performed in real time through the instruments' resonant bodies. Sound masking consists in a sound masking another one. This phenomenon comes in various forms such as simultaneous masking, the precedence effect (or Haas effect) and the posteriority masking.

During the compositional process, exploration with instruments, work with performers and construction of sound models were done simultaneously along with the traditional musical writing, resulting in a segmented form similar to a mask series. It is important to mention that the spatial arrangement of the string quartet influenced the writing of the piece. In this first piece, considering that each instrument represents a point in space, the real-time transformation was set according to each interpreter.

This piece inspired by a traditional festival in Latin America, marks my natural attachment to my cultural identity. The celebration of Paucartambo also known as the celebration of the “Vigen del Carmen" is a festival famous for the masks worn by all community citizens of Paucartambo during the festivities, and the confluence of pagan and religious beliefs of this same tradition.

ARTISTIC RESIDENCY IN RESEARCH AT IRCAM

The subject of my artistic research residency at IRCAM consisted in using the features of percussive instrumental sounds performed by a hybrid string quartet. In order to create the illusion of a stringed instrument sounding like a percussion instrument,this research began with the use of physical models made by Robert Piéchaud (engineer in the Instrumental Acoustic Team at IRCAM).This allowed me to raise certain issues on interactivity between these virtual instruments and the string quartet (feedback, saturation, shades, patch crash) and eventually lead to new virtual instruments capable of being controlled by the performance on stringed instruments. Here are the latest patches: 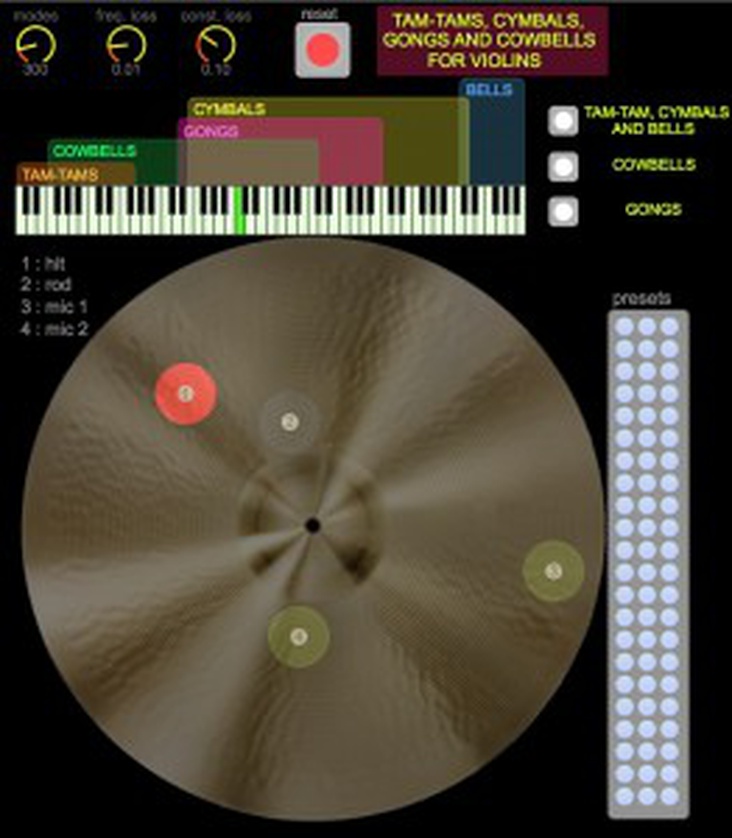 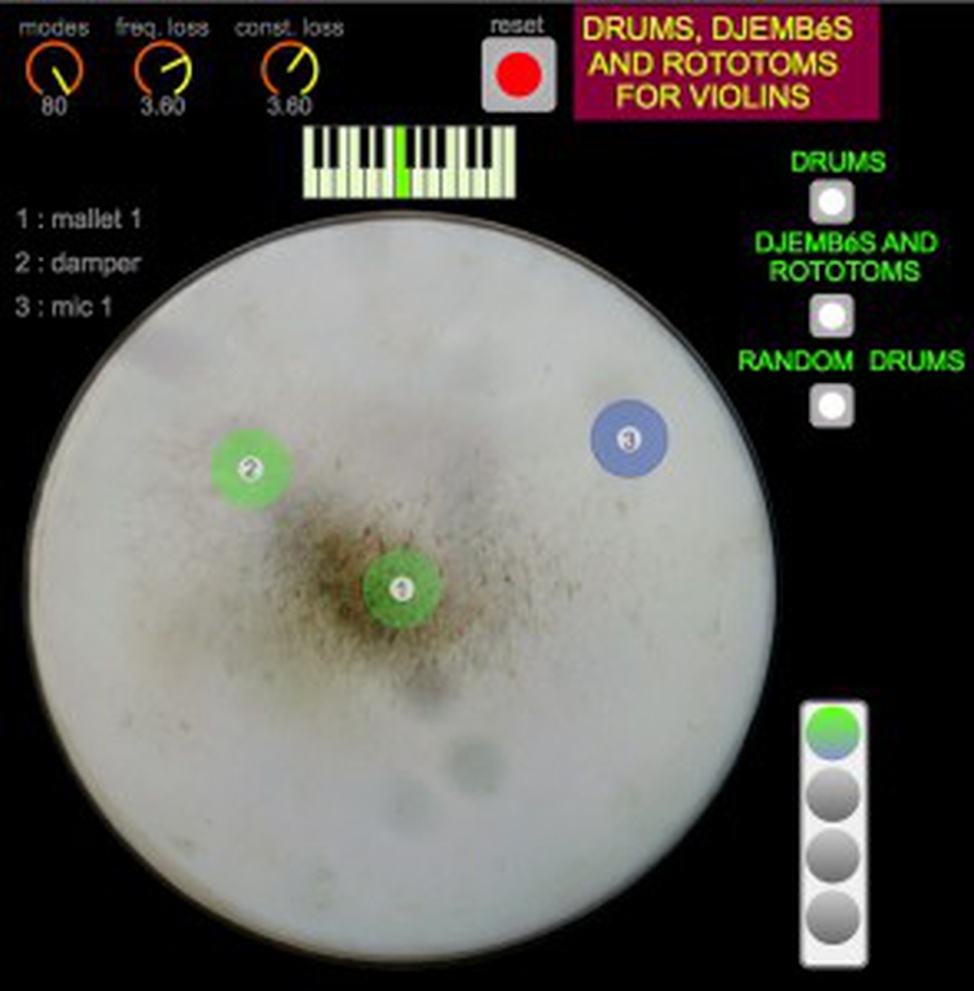 Creating analogies between the instrumental gestures of percussionists and quartettistes, this stage of the work was dedicated to some percussive gestures stringed instruments such as col legno batutto, arco batutto, pizz and on the different positions of the bow on the string molto sul ponticello, sul ponticello, ordinario, and molto sul tasto. 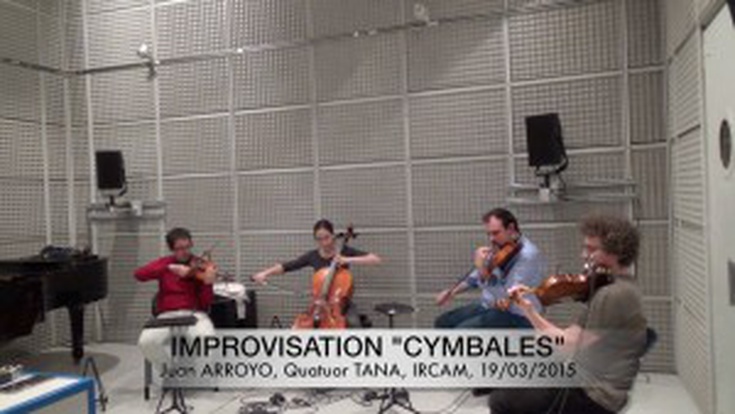 The outcome of this research within the Instrumental Acoustic Team at IRCAM allowed me to develop tools able to transmute the sound of stringed instruments as percussion instruments. This will lead to write a sequel of SMAQRA in the future.